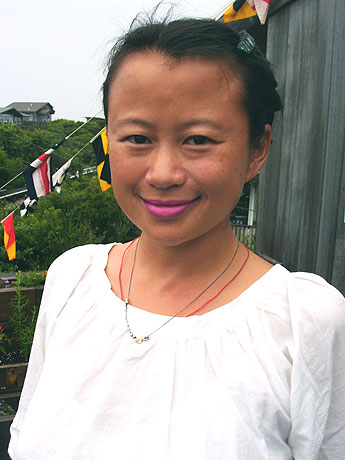 Valentine Leung is a New York based fashion designer known for her playfully quirky take on classic and wearable silhouettes.

Her interest in fashion began at the University of California at Berkeley in her experimental art classes while studying painting as an undergraduate student. She began making clothes for her art performance videos and quickly developed a keen interest in clothing construction. Upon graduating and moving to NYC in 1996, she began attending fashion design classes at FIT, where she began experimenting with hand sewn one-of-a-kind pieces that she sold at the Art Fiend Foundation. During this time she also began fashion styling as an assistant on photo shoots for major fashion publications such as Italian Vogue, W, I-D, Dutch, Japanese Vogue and Teen Vogue to name a few, thus developing an eye for well-made details and fine craftsmanship. Her first collection debuted in stores in the Fall of 2006.

Since that time, she has been featured in such reputable magazines as ELLE, Harper's Bazaar, Marie Claire, Teen Vogue, Nylon, Lucky and People amongst others.

Celebrities won over by her charming and unique designs vary from Meg White of The White Stripes to Rachel Bilson, Camille Belle and Isla Fischer.

In her fourth season as a designer, Valentine is already stocked in 26 stores worldwide such as Barneys Tokyo, Nordstrom, Intermix and Printemps in Paris.

These days, you can find Valentine running her latest venture, Park Delicatessen, a flower/skate shop in Brooklyn.